Welcome to part 3 of my Wars of Armageddon posts. In this post we will have a look at a Battle of truly epic proportions, the Praetorian IV line up alongside Tycho's 3rd Company (about 70 odd marines in this list!) and face off against the countless ork hordes of the Bad Moon warboss Nazdreg...

With 4k on each side there were a hell of a lot models to be deployed, my guard began the game mounted in their transports, I tried to spread out my high value targets across the table with while almost the entire 3rd Company of Blood Angels castled in the centre with devastators and assault marines on one flank. The ork horde (at least a few hundred) deployed across the width of the table with loads of dreads, kans, battlewagons and all sorts of other nastiness.

The Imperial centre was a fearsome sight with more boltguns than you could shake a stick at.

On the bridge my 3 chosen men infiltrated in the centre and the devastators took up firing positions. You can see my medusa and Macharius squaring up against the Bad Moon battlewagons. Within which was a big mek (5++ for the wagons and orks), Nazdreg, a huge mob of mega armoured nobz and plenty of other orks. 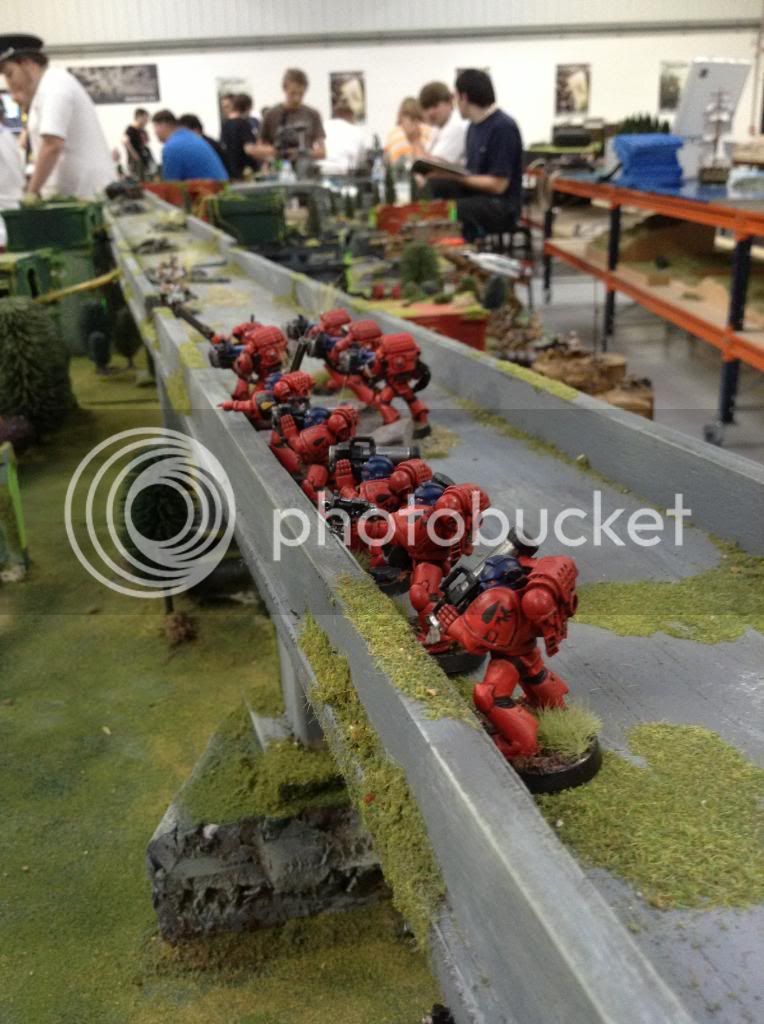 The chosen men having survived the charnel house of the chimera factory now find themselves as the foremost unit facing off against the orks.

We were playing an objectives mission and there were 5 of them spread out over the battlefield, all at least 12" from a board edge or another objective. They were all quite centrally placed and meant that both sides would need to push forward to claim them.

A big unit of shoota boyz take cover in a wood, just the other side of which is one of the objectives.

The ork battlewagons roll forward, heading as fast as they can towards the imperial lines.

The kanz lumber forward eager to get to grips with the Blood Angels, shielding the orkz behind them with their bulk.

The first few turns for the orks consisted of a lot of running while the Imperial forces tried to thin their numbers.

The tank commander surveys the pretty bleak scene, no amount of armour is going to save him if the orks are allowed to close!

The medusa waits out of sight ready to strike when the orks get a little closer. 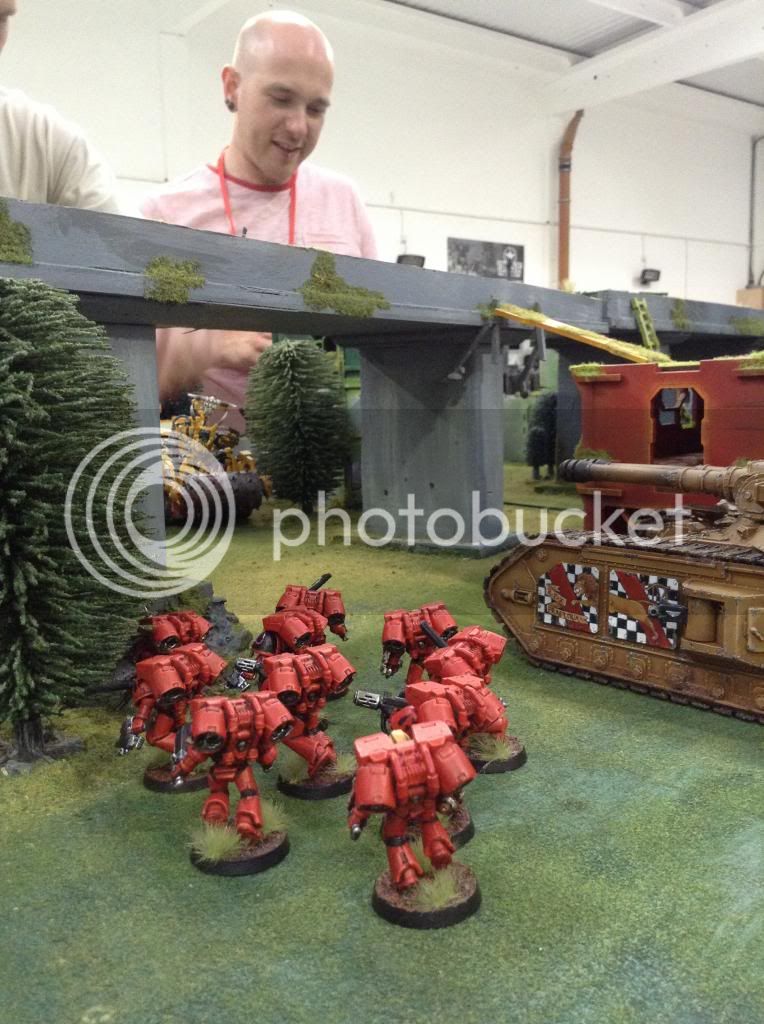 The assault marines patiently wait for the orks to come closer, planning to sacrifice themselves to buy my tanks more time to eliminate the key targets.

This photos gives a good impression of the scale of the battle. The opening exchanges whittled down the devastators, while the chosen men withstood a hail of ork shootas and big shootas, only the sergeant survived, but his survival was enough to deny the orks first blood!

The medusa with its AP rounds destroys the lead battlewagon releasing its cargo of Nobz.

The Macharius lines up the Nobz...

The assault marines strike, leaping into the heart of the ork assault! Facing overwhelming odds they assault the battlewagons and nobz .

Epic stuff from the Angels of death.

More orks advance on the objective in the ruined hab block.

The lone chosen man continues to pick off orks from his position on the highway.

At this point sadly my phone ran out of battery and the photos end! A massive shame as the battle got very very interesting. I'll try and fill you in on a few of the highlights.

Deff Koptas arrived on both flanks, those on the left shooting the devastators and then assaulting them. The koptas failed to kill any marines, one of the devastators took a wound of the orks who promptly fled and were caught!

Nazdreg and his boyz disembarked and charged into the Imperial lines, at the same time Guard reserves in the shape of a hellhound and a few chimeras with guardsmen turned up. Chimeras started getting destroyed but proved enough of a distraction to allow the heavy guns to continue to pound the ork advance.

The orks wisely shied away from the Blood Angels defensive position in the centre, this caused a massive  funneling of orks to where the bad moonz battlewagons had been wrecked, presenting plenty of targets for the Thudd Guns and Colossus.

Nazdreg despite failing with his attacks on the Macharius (it was a King Russ from the event rules pack, AV14 all round!) then proceeded to soak up almost two turns worth of shooting from our combined armies! Eventually he was felled by weight of fire but the distraction had proved costly as the orks sat on most of the objectives and were proving very difficult to shift.

The Guard reinforcements (with fast chimeras thanks to the victory in the chimera factory) quickly advanced on the objectives hoping to have a late smash and grab. The last turns became a real case of target priority with all our efforts focusing on shifting orks fromt he objectives. In this respect the Thudd Guns were invaluable landing barrage after barrage onto the ork positions.

As the dust settled at the end of the battle the Imperials were victorious, the orks had been denied objectives, and the late moves by the mechanised infantry and Blood Angels had secured victory. The lone chosen man who had denied the orks first blood remained alive, and both armies had managed to obtain line breaker.

There will still be one more Wars of Armageddon post to come where I post a few more photos of other battles and tie up a few loose ends.

Posted by Colonel Winterborne at 17:30 3 comments:

Before I post the next load of my Wars of Armageddon photos I thought I'd give you a few photos of the new Praetorian Chosen Men that you might have seen defending the Chimera Factory, and also the test model of a platoon of Tallarn Desert raiders that will be joining the Praetorians in the future.

So far only three finished Chosen Men. I wanted to get all 5 done for Armageddon but sadly 3 was all I could manage. Luckily for me 3 was the minimum unit size for Ratlings (count as) so no problem with fielding them at least.

The legs are plastic IG, there are various items on the belt which are IG and the torso, arms, epaulettes, guns and heads are Victoria Lamb. The greenstuff addition of the Rifleman plumes on the front are my own work.

Here we have the leader lighting up a cigar. 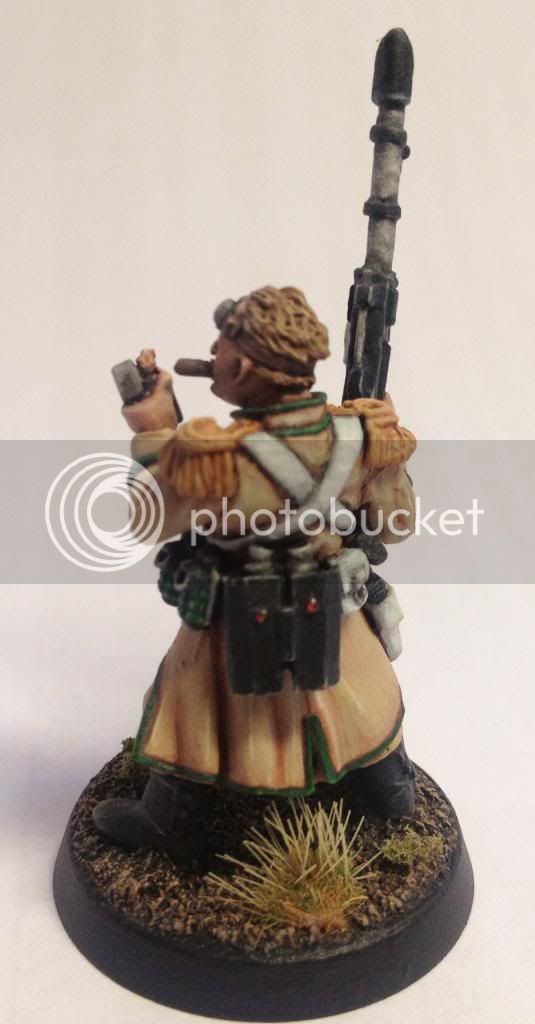 For these guys I kept the same main colours with the white belts etc and the khaki uniforms, but as denotes their special status I ventured into green for them, as colour which hasn't really featured in my army up till now with red being the preferred colour. 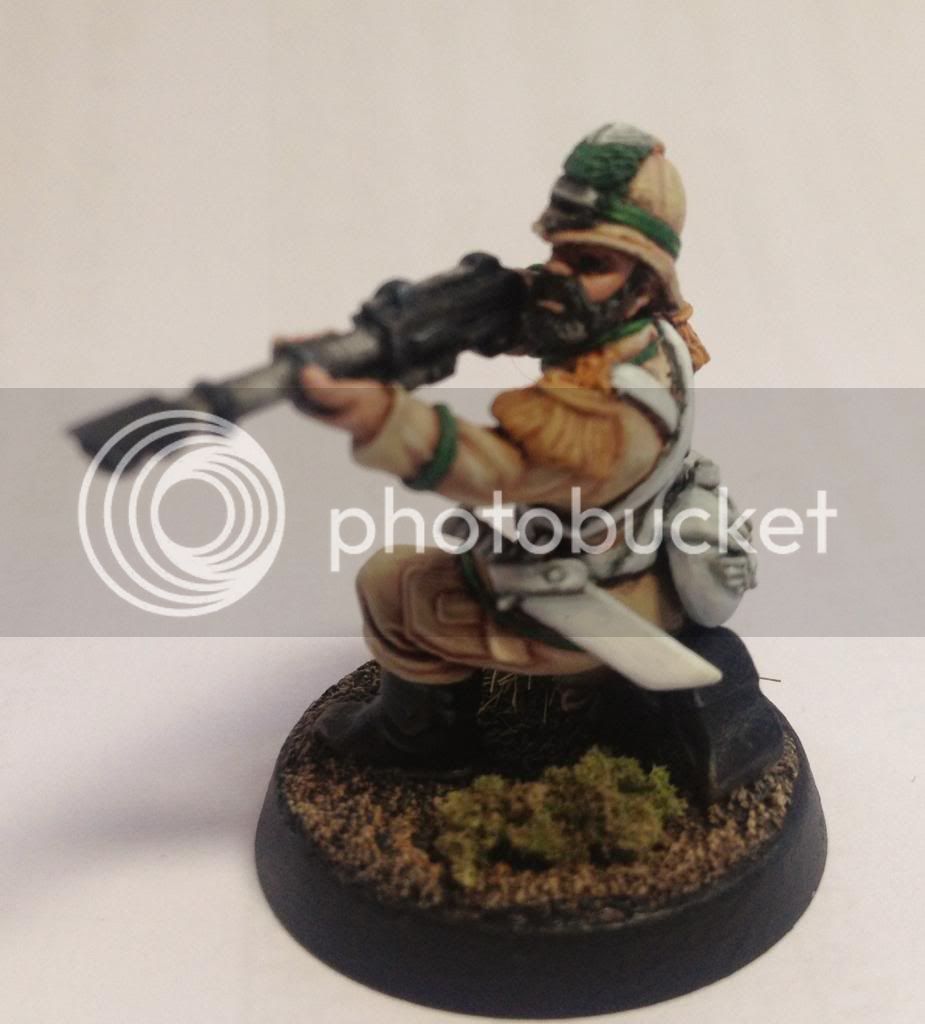 You can see from the photos the the Victoria Lamb epaulettes are absolutely brilliant, successfully saving me a lot of hours trying to do my own, and in particular they ensure they are a uniform size and shape.

Here is latest edition! The test Tallarn model Using the same colour for the tunic, I've used the white for the head scarf, a new gray for the trousers and then brown for the wrappings, belts and pouches etc (not least because the white is a pain to paint so much of!).

The Tallarn range have some fantastic faces which are great fun to paint.

With the armoured shoulder guards I can include squad markings. This guys here is from Squad B or possibly company B.

Another of this characterful guy and then the the squad with the Tallarn for scale and comparison. I reckon a platoon of the Tallarns will look great lined up with my Praetorians. I'll have to get a lot more chimeras I reckon, can't have all these poor buggers walking to battle.

In the next post you will once more get to see the Chosen Men in action facing down a truly immense ork horde...
Posted by Colonel Winterborne at 14:00 10 comments:

It occurs to me that I've been very reticent with my posts from various campaign weekends, so much so that I forgot to post the 3rd part of Vidar's Fate at Warhammer World!