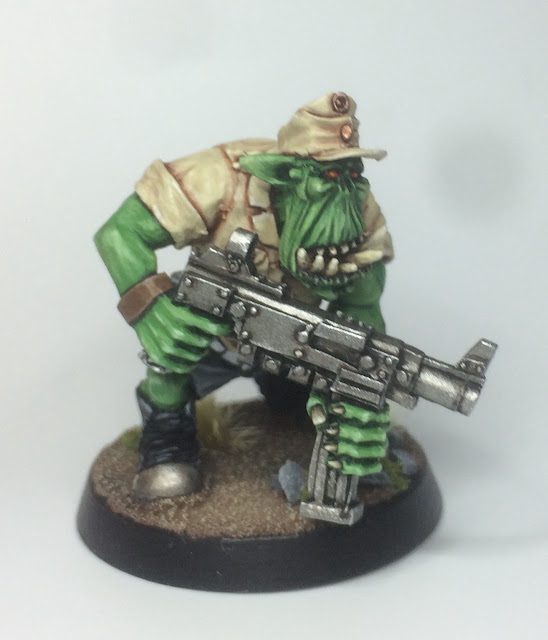 Now before you call the Inquisition on me hear me out. Back when the Praetorians came out, part of the story of Big Toof river was that the badly led Imperial Guard had ignored the intelligence of their highly paid mercenary blood axe kommandos. In doing so they walked right into a trap fully believing the settlement to be lightly garrisoned. As you all know it did not end well for the Imperial Guard and led to Glazers Creek where the remnants of the 24th where holed up maintaining supply lines. 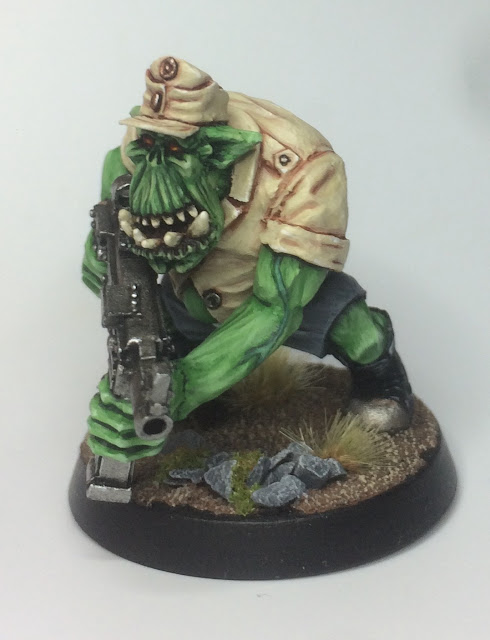 Anyway, I've always loved the idea that the Blood Axes could be bribed to turn against their fellow greenskins. How far you trust their intelligence is another matter entirely. This inspired me to build a unit of kommandos to fight with my guard, either as proxies for something or simply as orks in bigger apocalypse style games where their sneaky skullduggery can be woven into the story. 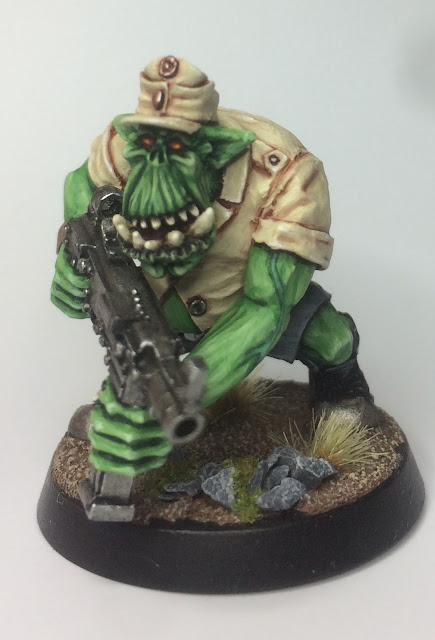 Anyway enough guff about the fluff, let's talk models. This guy is one of Kromlech's fantastic Afrika Korp models. They have tonnes of character and with the uniforms I thought they would fit in a treat with my Praetorians. 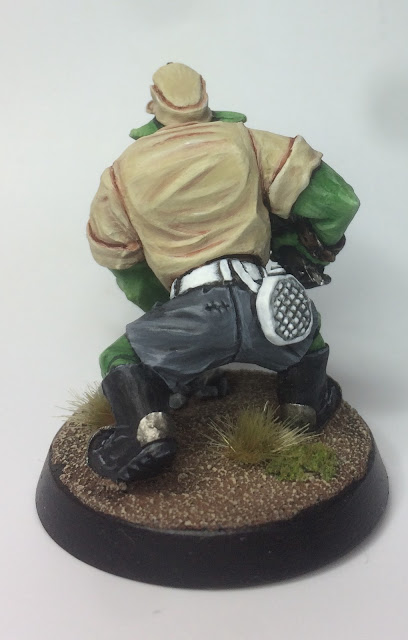 This model was a lot of fun to paint and was also very straightforward. I actually painted him in parts, with the torso and legs glues together and then the arms and head separate. It was a pain when it came time to assemble him as I had to greenstuff the gaps on the arms, but it was worth it for ease of paint job. 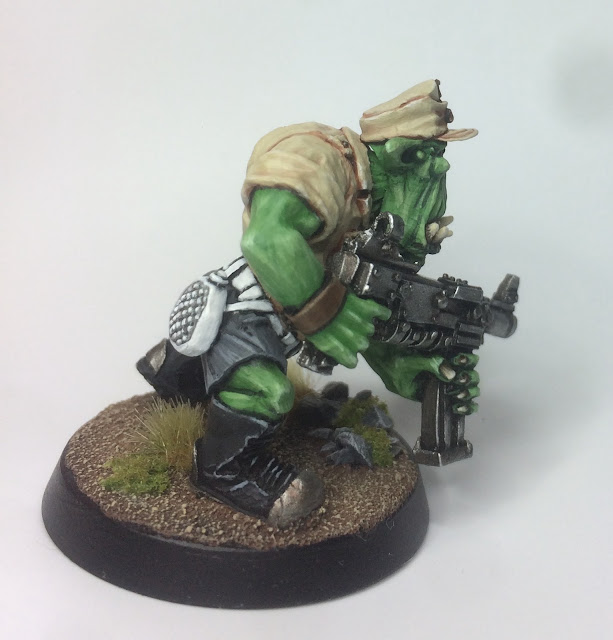 The green for the skin is the GW method they demonstrate in their instructional video with an extra light highlight from me to make it that little better. The eyes are worked up to pure yellow in the centre too to give them a little extra interest. 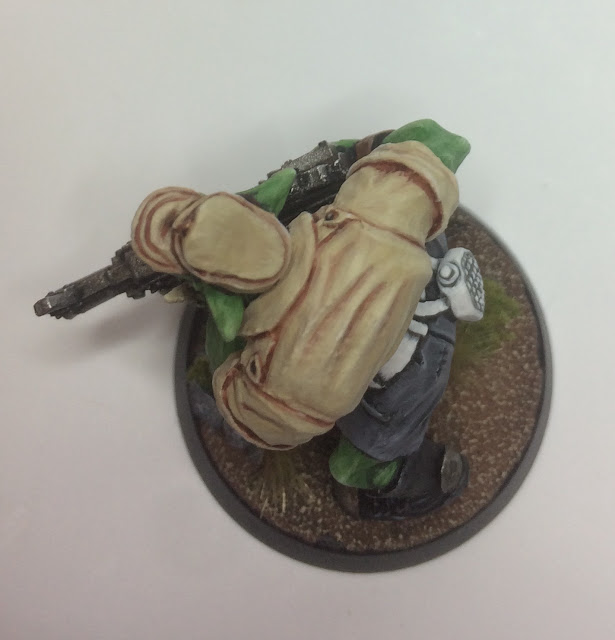 The white webbing is the same as my regular guardsmen as is the uniform colour. I've changed the shorts to grey to add an extra colour or else I though it would end up far to mono colour. The gun itself is just plain silver as I was at a loss what to do with it! 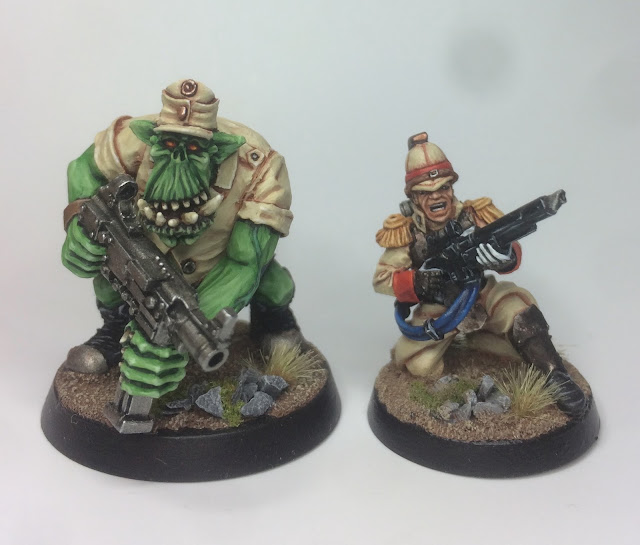 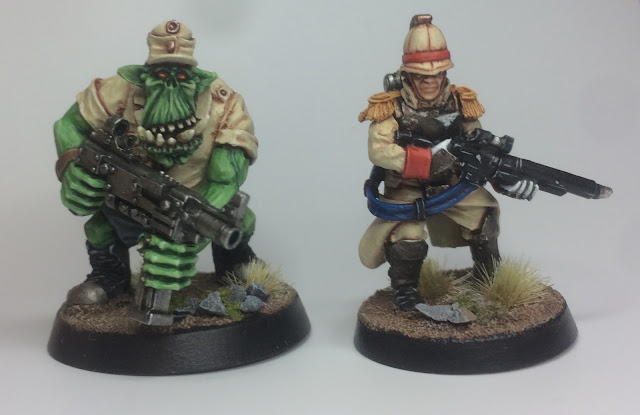 This ork is pretty massive in comparison to the guardsman, just as it should be. I know orks are meant to be on the same size bases but I fancied they would look better on the new Space Marine bases and I think I prefer them on the bigger size. 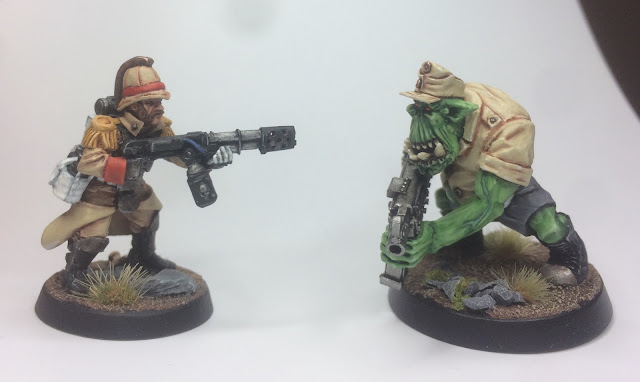 Here we see the ork staring down the barrel of a Life Guard's flamethrower. You will see the vein on the ork arm which is painted with a slight blue hue 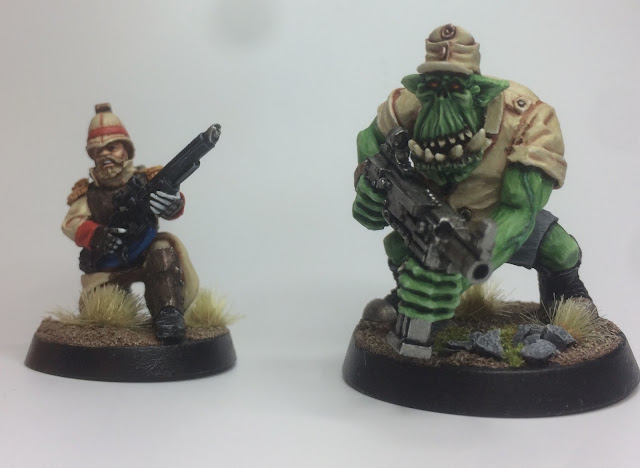 So there you have it, the first of a unit of 10 sneaky Blood Axes to add to the Praetorian IV.

I'd really love some feedback on this guy before I paint the best. In particular the following - the weapon, can I leave it just metal? I it needs another colour, what? What do you think of the skin, does it need to be darkeror different in another way? Does the model need more colour?

Any feedback whatsoever would be greatly appreciated!

Cheers!
Posted by Colonel Winterborne at 21:46